I’ve eaten quite a few pizzas in these 35 years. Some really good ones, some exactly the opposite. Some fat ones, some the size of zero. Some oozing with molten cheese, some so dry that the Indian chapati felt softer in comparison. Some absolutely fresh and aromatic, some giving away the synthetic taste of canned marinara. Some just out of the woodfire oven, with the buffalo mozzarella glistening against the cherry tomatoes and rocket leaves, some sadly making do with tinned jalapeno, shrivelled up mushrooms and stringy chicken. 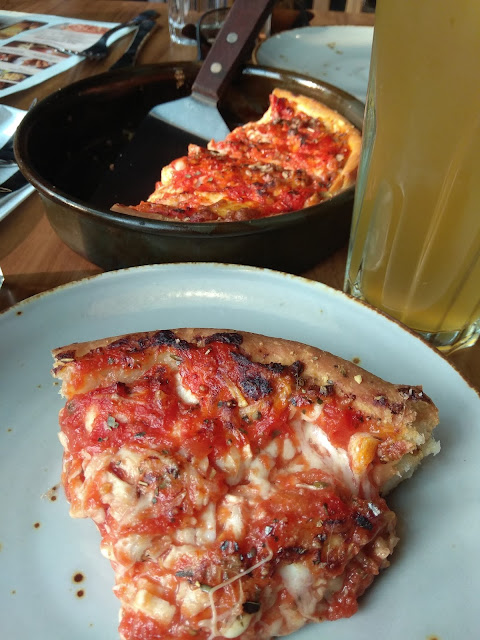 Yes, I have had quite a few pizzas in these 35 years. But today I ate the best one of my life. A deep dish pizza that resembled a pie. Where the dough didn’t overpower the sauce and the cheese. A pizza that was invented at Chicago’s Uno Bar & Grill in 1943, and which has stood the test of time. Where the mozzarella folded in the chicken chunks perfectly without taking away from the flavour of the tomato sauce. And where, I could taste the tomatoes in the sauce, like how they actually taste… part tangy and part sweet. Soft, melt-in-your-mouth and absolutely delish, I realised that this is one pizza that I wouldn’t forget for the rest of my life! 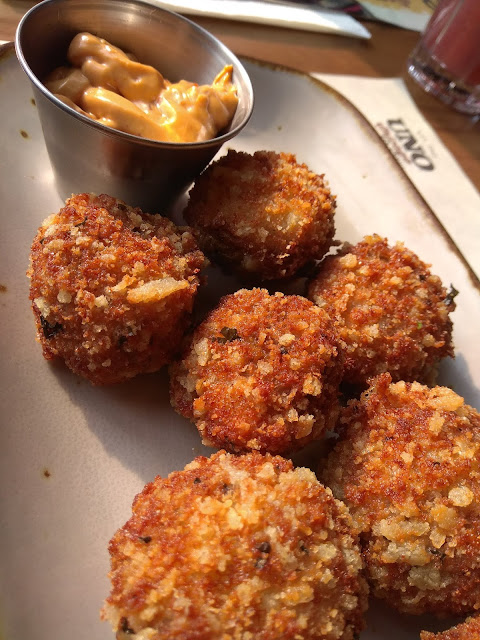 May be my six-year-old would declare the same if he hadn’t given his marks entirely to the Mushroom poppers, a fun appetiser that cleverly binds the squishiness of mushrooms with the gooey texture of molten cheese (spiked with bits of jalapeno) inside a crispy crust. 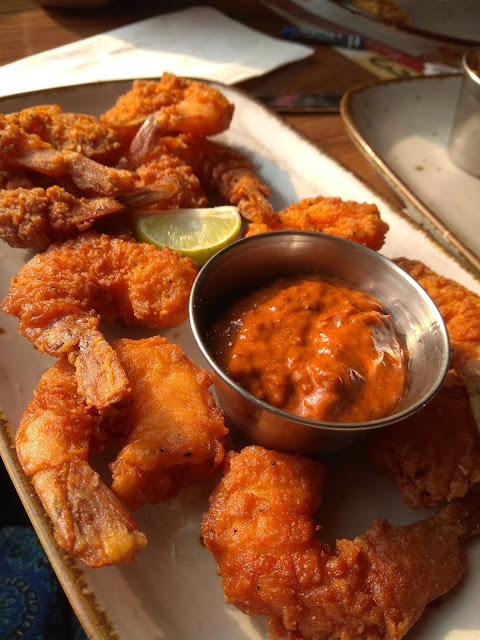 Uno Chicago Bar & Grill at Noida’s Garden’s Galleria Mall would have turned out like the ubiquitous casual diner dishing out the conveyor belt quality Mexican and American fare if not for these high points. You get the pastas, the quesadillas, tacos and grills, but it’s the taste that makes all the difference. They taste so much better than what you get at places similar to Uno. 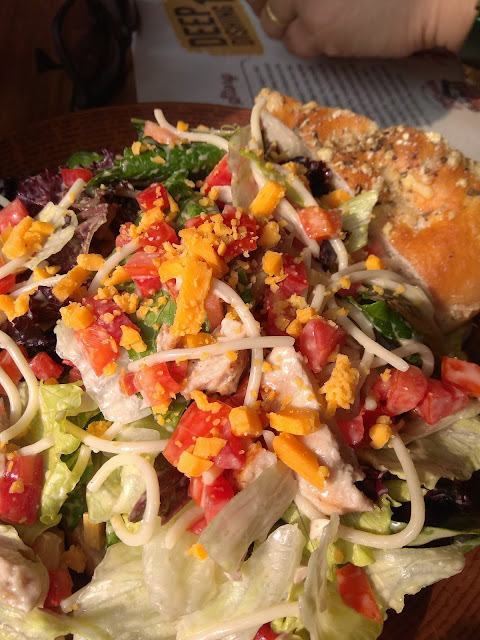 Another thing, it’s the setting. Gleaming sunlight rushes into the eatery giving it a merry vibe. As my mister said, he could very well picture himself in this eatery with a bunch of friends enjoying their Hoegarden with a football match showing on a giant screen inside. It is spacious, has an informal, breezy feel and does away with the claustrophobic air felt at most of such casual diner and bar franchises. The restaurant has an outside seating, which is apt for winters, when the balmy sun will add to the experience of tucking into a slow-cooked Lamb Bolognese. 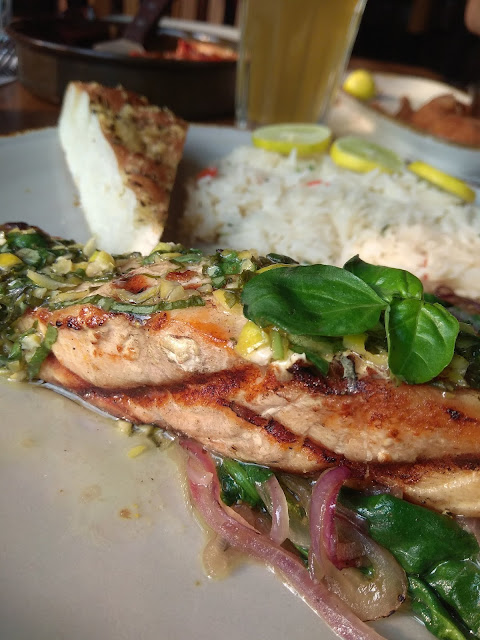 I believe a meal should always commence on a good note. If that happens, you don’t mind it even if all the preparations are not top brass. So, after having a fantastic Mushroom Poppers and Rock Prawns Dynamite, it didn’t bother us that the Grilled Chicken Salad was a tad ho-hum. And, after wolfing down a heavenly deep-dish pizza, we weren’t too sold on the Grilled Lemon Basil Salmon. But yes, in case you are opting for this fish preparation, do tell the chef to make sure the pilaf is piping hot and the onions in the spinach not soggy. 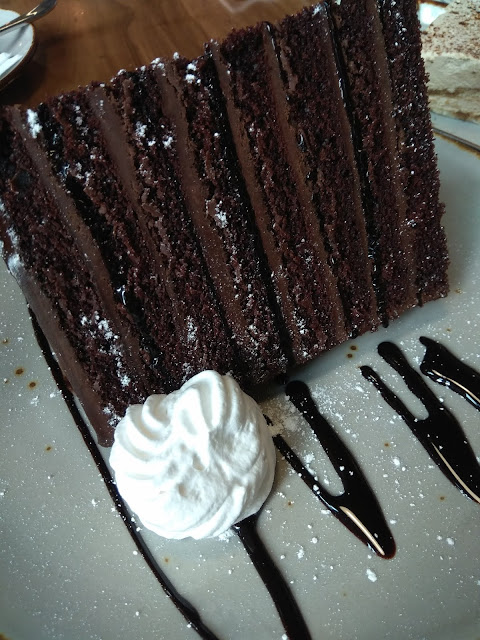 But then, try the specialities at Uno. The delectable pastas and the scrumptious pizzas. Maybe this isn’t the best place for a grilled salmon. The lamb and the chicken dishes are fabulous, too. And once done, choose the well-tempered tiramisu to end the meal. It is subtle, soft and balanced.
Chocolate fans can order the insanely large chocolate cake. But, be prepared to see a ginormous block of chocolate placed before you. I’d loved if the chef warmed it up a bit so that the fudge softened. On hindsight, the tiramisu was a better dessert. A masterpiece in restraint!
At: Gardens Galleria Mall
Ph: (011) 30806512
Meal for two: Rs 1,300 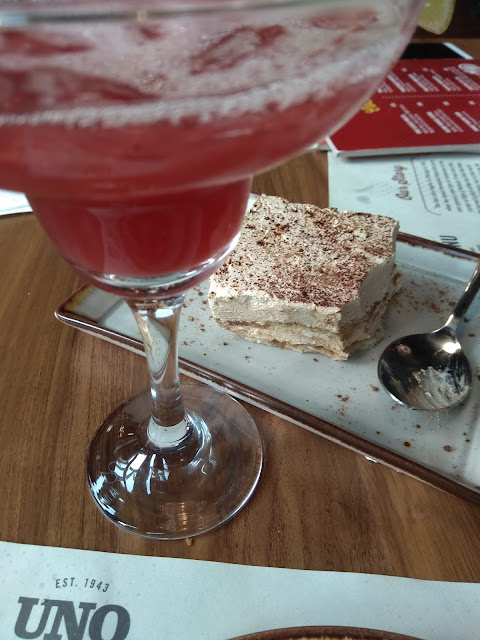