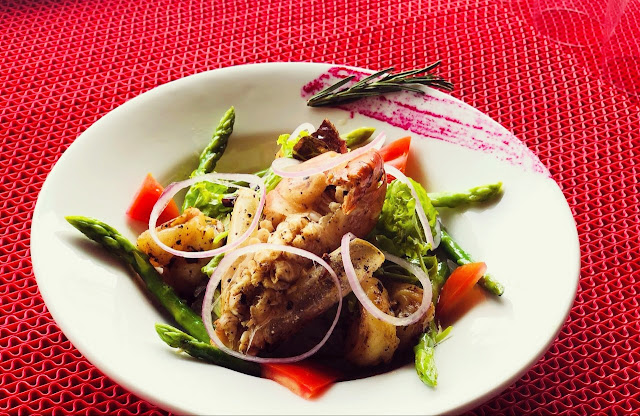 It was pretty routine. The way we celebrated Easter in Calcutta. After the school celebrations of exchanging painted hardboiled eggs and crafting cotton wool chicks, Good Friday mornings would be about packing our bags for a road trip to some nearby tourist destination. The places would be remote but the mode of communication was always our faithful old Fiat that Dad drove with diligence. We never used the train or any other public transport. The Fiat, frail with age, would break down once in a while. But Dad was always ready with his tools and resourcefulness!
We would put up at a nondescript guest house, sample the local food and after sauntering around aimlessly for two days, would drive back home on Easter Sunday. They were not fancy trips but immensely joyful ones. And innocent. We laughed, chatted and made loads of memories. Something that completes family celebrations. 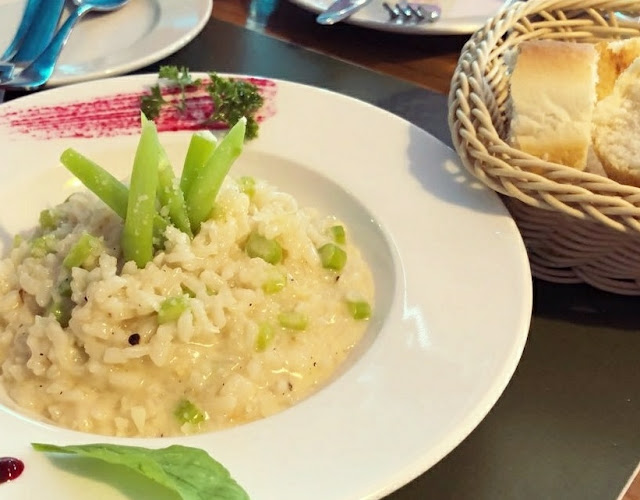 As Baba pushed 50, the road trips stopped. His weak heart could not take the stress of the long drives. But the outings never ceased. We went for family dinners and ate cakes at Nahoum’s in New Market. And visited relatives. The celebrations didn’t stop… 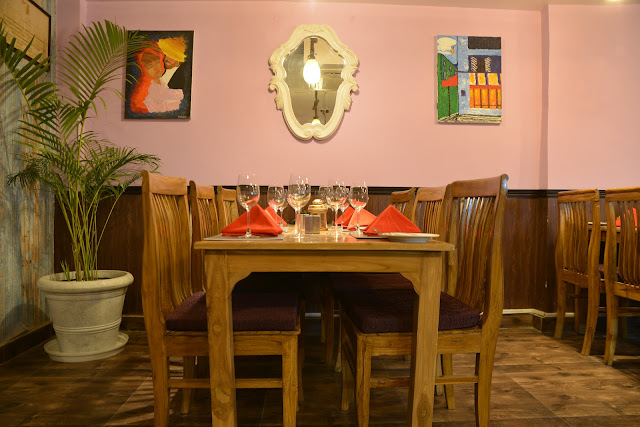 This year, we had our special Easter, too. At the new Chez Jerome Restaurant that set up shop last month in the bustling GK 1 M block market. Being a family of foodies (yes, the tot likes his fare fancy already!), we looked forward to being served authentic French delights rustled up by Chef Jerome Cousin. For the uninitiated, Chef Jerome was at the helm of culinary affairs at Rara Avis, that attained popularity for serving wholesome French food to connoisseurs before shutting shop a few years ago over rent issues. Living in India for 15 years now, Chef Jerome (who also had Le Petit Café) wants to regale Delhi’s gourmands with rustic homestyle French fare served in a casual dining area devoid of the snootiness often associated with fine French food (the décor however, could have been different, with a prominent bistro feel).
When we reached the restaurant, the chef greeted us with a warm smile and chatted up about the food that is served there--- authentic and fusion-free. For those who want to give French fare a pass, you can order from the Asian or the Italian section (there are separate chefs making those as well). Born in Franche Comte, the north eastern region of France, the food that is served at Chez Jerome has Swiss influences (probably because he was born to a Swiss-Italian mother). Busting several isms related to French cuisine and its pairing with wines and champagne, we couldn’t wait to tuck into the lunch, cooked by the master, who has obviated the refined aura associated with European fine dining to serve food that is robust, humble and full of flavour. 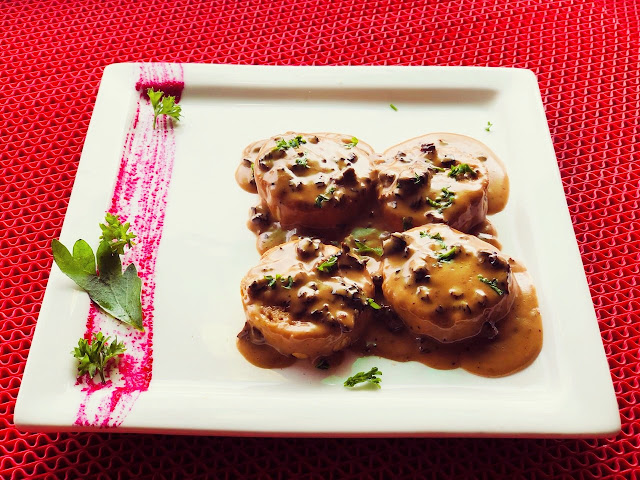 “I don’t believe in using too much chillies. It takes away from the original flavours. But our food is not bland,” he said. It certainly wasn’t. The morel mushroom croutes, where a rich creamy sauce with bites of morel covered toasted croutes, burst with flavour and texture. 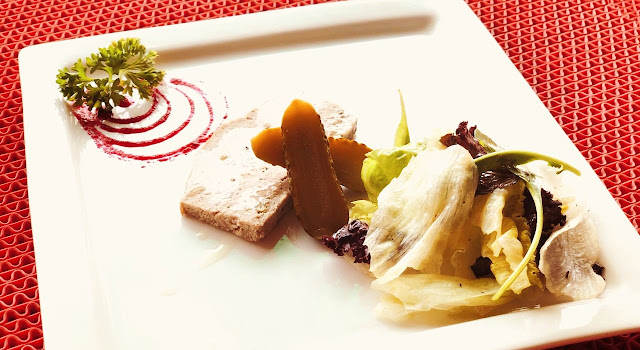 The duck pate (a preparation I’m generally vary of) was delicate yet delicious. The pate was soft but had a nice grainy composition and the chef had cured it perfectly to get rid of the pungency. It went beautifully with the greens on the side and the pickled gherkins. Though the mister found the tiger prawns and asparagus salad to be a bit lacklustre, I quite liked the vinaigrette folding to it. However, it didn’t carry a redeeming punch that could have lifted it up. 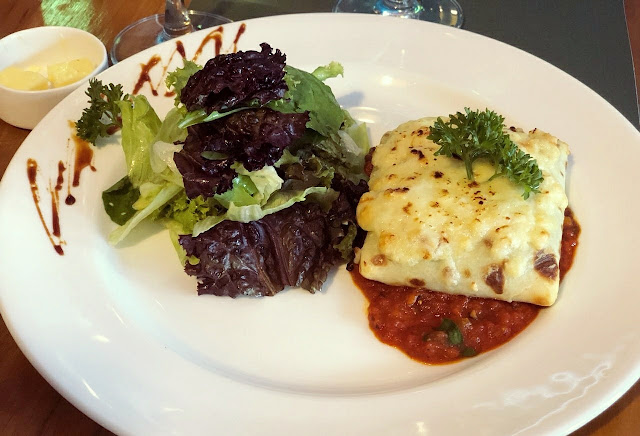 The best from the starter section, without a doubt, was the spinach ricotta French pancake. It was a baked crepe with a ricotta and ground spinach filling rested on a bed of the French version of the Marinara. What I loved about the tomato-based sauce was that it has a sweet tinge to it which undercut the sour taste. The baked crepe was fat and filling and utterly comforting. The crunchy greens fabulously complemented the soft pancake. 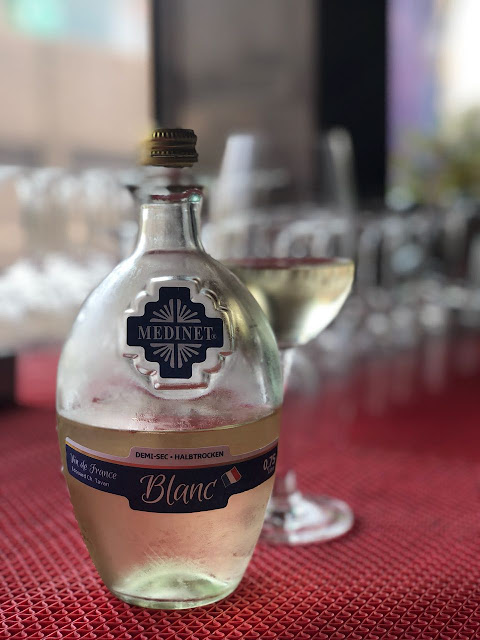 All this was paired with a goblet of chilled Medinet blanc. The typical Vin de France white wine is an everyday accompaniment to the food the French have, said the chef. He highly recommended it and with one sip, we could gauge why. 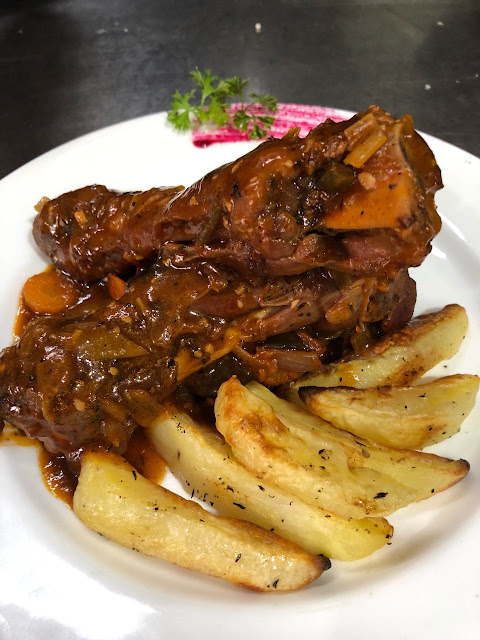 Our enchantment with the chef’s mastery continued with the mains, in the form of lamb shanks with honey and thyme reduction served with ratatouille and roast potatoes. The chef insisted that he has done away with the art of fancy plating in the restaurant because he wants his guests to enjoy the food as how they would do it at country homes in France. That made sense. But maybe, the shanks could have been better plated so that the ratatouille would be distinguishable. While food preferences and tastes are subjective, we also wouldn’t mind if the roast potatoes would be served as whole small potatoes with skin and not like French fries. But the shanks were great---juicy and meaty, perfect with the lovely sauce. 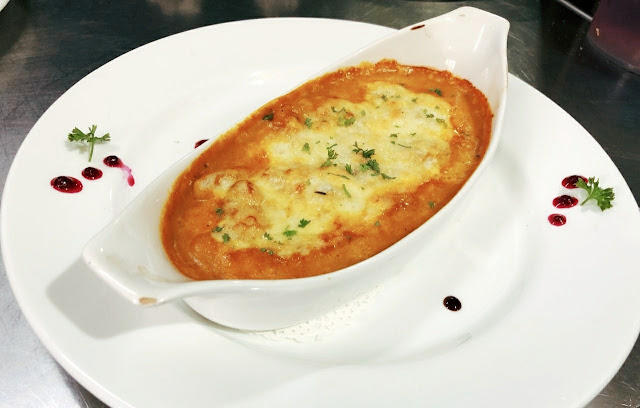 The fish gratin curry de Madras was a curious dish simply because it tasted nothing that one would expect out of France. It was a spicy dish filled with chunks of Basa (not the best fish to serve in a curry) reminiscent of Indian curries. Inspired by Moroccan flavours, where peppercorns were a plenty, the chef said it was made using 12 spices. While it was different, we did feel it wasn’t the best fish dish we had tasted. Risottos we love but not the one we ate at Chez Jerome. The asparagus risotto wasn’t as flavoursome as a wild mushroom and truffle oil risotto. It was a bit tepid and need a spark.
By the end of it we were petty stuffed. The French are famous for their desserts, so we had to sample Chef Jerome’s varieties. But what was served did leave us disappointed. And that too, after a wait of 45 minutes (since the chocolate fondant is made from scratch). The chocolate and strawberry fondant wasn’t set and had a hangover of flour. And yes, we have had better lemon tarts. The crust was too hard and the lemon filling was runny. The meringue was tasteless. Maybe, the kitchen hands at the restaurant will need a bit more time to perfect these… 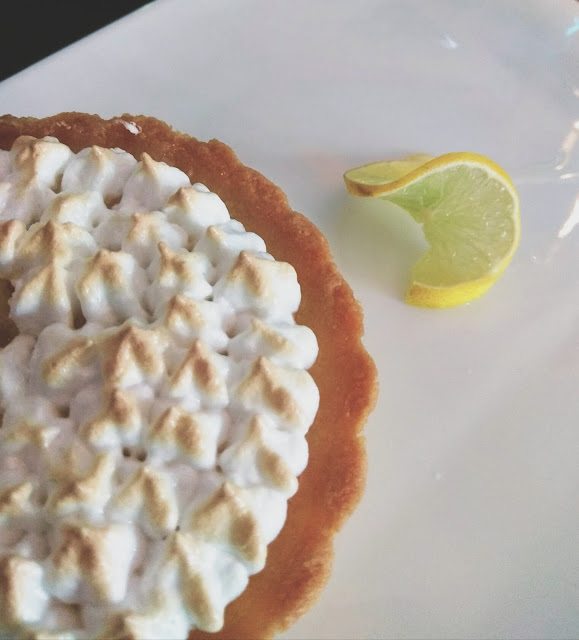