The Good-looking at Fisherman's Wharf in Goa 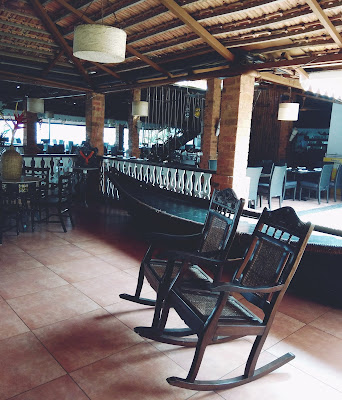 A week back, while savouring a wholesome joshimath dal (smoked horse gram tempered with Indian spices) with a methi parantha at the Park Hotel in Delhi, an old acquaintance remarked how many restaurants today concentrate more on atmospherics. Sometimes, the drama overshadows the food. Unless, the victuals are absolutely fantastic. I couldn’t agree more. We cited some instances where the décor, installations and theatre superseded what actually landed on our plate and where we satisfied ourselves with what we saw rather than what we ate. That day, I’m happy to declare, nothing of that sort happened. The winter menu at Fire was one mean food journey from various parts of the country focusing on fresh, organic and seasonal produce. 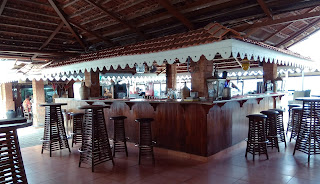 I can’t say the same about Fisherman’s Wharf at Cavelossim in Goa, where we lunched on Monday. Don’t get me wrong. I am not going to tear the place apart because I did have a good time there. But, when I ate the food that I had read so much about, I stopped believing in all the praises it had garnered on Zomato. Serving authentic Goan cuisine as well as a bit of Continental and North Indian fare, the food isn’t the hero of the place. The setting is. But there were the positives that must be dwelt upon. 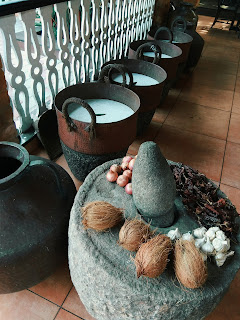 Since Goa is riddled by the notorious taxi mafia, we were referred to a known cabbie by a dear friend for travelling to Cavelossim from Club Mahindra in Varca, where we were putting up. We instantly took the bait, little knowing that we would be paying a whopping Rs 1,300 for 10 kms (up/ down plus waiting time). So yes, it’s sufficiently proved that travelling within Goa is an expensive affair unless you scooty it out yourself. 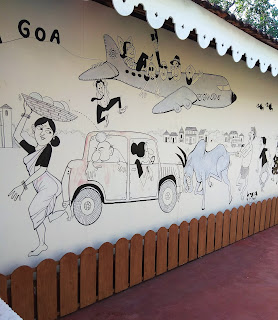 I digress… Fisherman’s Wharf is quite a romantic setting. Situated on the bank of the River Sal, the interiors predominantly focus on thatched roofs, large boat installations, clay urn planters, graffitied walls (full of funny scenes from the Goan diaspora) and antique Portuguese furniture. The red floor adds to the old-world charm. We immediately loved what we saw because the interior designer has done a darn good job. I loved the display of spices and coconut on a huge mortar and pestle. Rows of colourful boats on the opposite bank made for a serene sight, and the tot was excited when the birds occasionally came by. The husband ordered his customary King’s beer and I chose a green apple martini to start the afternoon with. 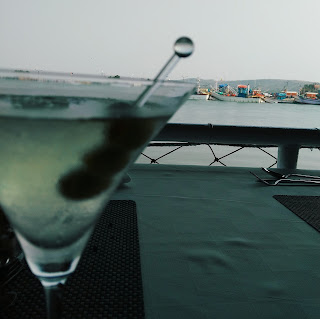 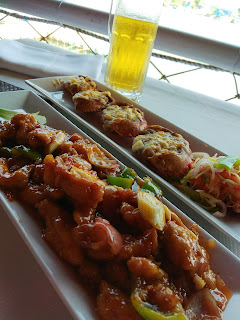 Every time I am in Goa I curse my sea food allergy while am sure the husband silently thanks his stars that he can doesn’t have to share. This time would be different. The kid is slowly becoming quite a gourmand himself! So, we ordered a baked crab instantly. It looked divine on arrival but sadly that cannot be said about the taste. Lacking proper seasoning, it needed some spiking up. I put a bit in my mouth and realised that the muddy note had been retained (maybe on purpose) but in totality the dish was a bit too bland. 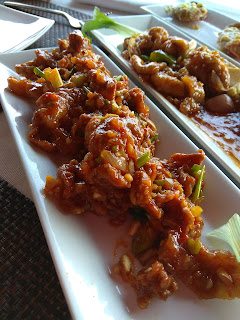 We ordered a honey glazed chicken to be on the safe side, as well as a crispy pork cooked with toddy. The chicken was soft, juicy and perfectly spiced. After the crab let down, we really enjoyed the meat. The pork sauce was tangy and spicy and the pork was crunchy. Maybe a bit too crunchy. But in all, a good starter. 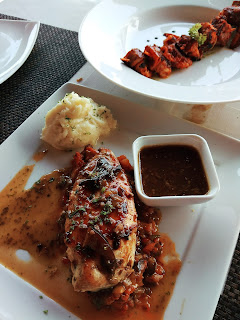 Next up, the husband went for grilled prawns wrapped in bacon while I wanted a chicken stuffed with mushrooms as I was curious to find out how the Goans do their continental food. Also, since I wasn’t in the mood for a Xacuti or a Vindaloo as I had my fill of both the previous night. 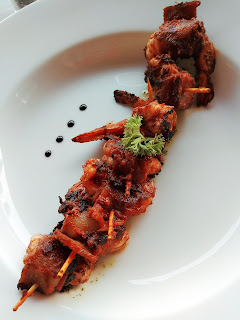 The plating was impressive when the food arrived. But the chicken breast turned out to be overcooked and the sauce wasn’t spectacular. The mushroom stuffing was better though. It has a rustic flavour that saved the dish from sinking. The prawns looked very appetising in their reddish masala. But as my husband enumerated later, it lacked a redeeming factor. 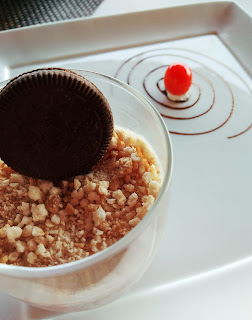 We had to have desserts to salvage the situation. Already disappointed with the mains, we played it safe. A caramel custard was brought in for the child and he seemed to enjoy it. We ditched the traditional bebinka and chose a Serradurra (made of whipped cream and topped generously with crumbed Marie biscuits and an Oreo cookie). It was surprisingly subtle yet very good. 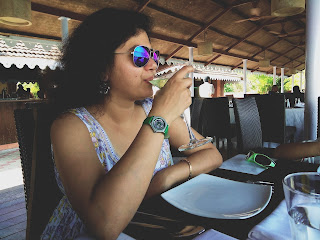 For a meal that cost us about Rs 3,700 and for a trip where we felt fleeced by Rs 1,300, I just wish I was penning a praise instead of talking about a lacklustre meal. Hope this was more about a fabulous gastronomical experience instead of an occurrence that we decided not to repeat... 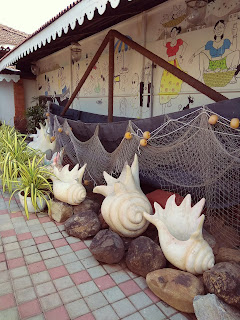