The Hills are alive... with the sound of music... and great food...

December 29, 2017
In the bustling M Block market of Greater Kailash One there used to be a quaint little café called 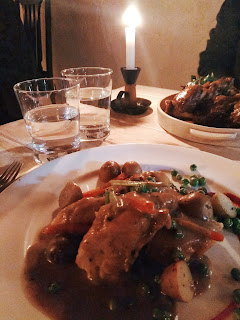 Sakley's - The Mountain Cafe. The eatery, fashioned on the idea of a log cabin in the hills, has been a favourite haunt of ours whenever the girl gang is done with retail therapy. My bestie introduced me to it a few years back and since then, notwithstanding the new launches in the area and the lucrative happy hour deals, we sauntered into Sakley's without a doubt. Every single time.

Yesterday, as we spoke about where to meet for dinner, my friend informed me about it shutting shop. My heart sank. I have fond memories of the place. Not only is the food delicious, but the décor is also pretty, the lights soft and the ambience cozy. Pine cones studded floors, a woody complexion for the entire insides, the place transported us to a colonial hill station every time we stepped in. Such was the vibe.
She suggested we try the place that has opened up instead. Initially reluctant, I agreed. As I walked up to the restaurant to meet her, my eyes lit up. NOTHING HAD CHANGED. Except the name. Sakleys is now Music & Mountains - Hillside Café but the heart, thankfully, is still in its place. I sat down after letting out a mini yelp of glee.
The old menu has been retained. We immediately ordered the Pine Dew Bruschetta with tomato, buffalo mozzarella, basil dressing and microgreens. It set the mood for a jolly evening of giggles, gossip and gags. I wonder why this eatery isn’t much talked about. Because the food is heavenly--- wholesome, diverse and fresh. The variety will leave you spoilt for choice.
For mains, we went for Swiss Chalet Roast chicken with rosemary baby potatoes and asparagus the Blue Mountain Lamb Shanks with mashed potatoes, garden fresh salad and lamb jus. When the food arrived, we wondered whether it was sent out for a little Roman Army! The chicken was delicately 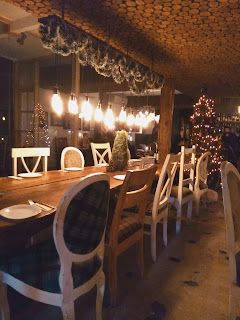 flavoured yet rich and creamy. Even the pieces that were against the grain were tender. The lamb shanks were like spiced butter, effortlessly falling off the bone. It was as delectable as delectable could be.

The Italian and Continental spread is exhaustive (and every portion is huge), with super breakfast options as well. Last time we had the butter pancakes loaded with cheesecake, homemade preserves and blueberry whipped cream. Pure decadence. You can also try the Black Forest sautéed mushrooms and spinach poached eggs with their special Hollandaise sauce. They have delicious pizzas, steaks, sizzlers, sandwiches and burgers if you care for artisanal fast food. The vegetarian selection is fabulous, with the strengths being baked eggplant with homemade cheese sauce and 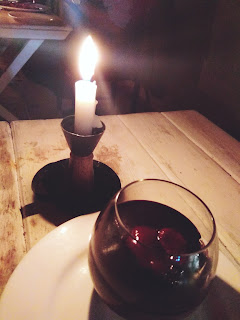 topped with a parmesan crust and countryside Ratatouille. Pescatarians can try the grilled red snapper with homemade Romesco sauce or the Pan seared John Dory. Frankly, I’m still a surprised why this little gem isn’t lauded? Because it deserves to.


Even though full, we could not, not have desserts. We zeroed in on the dark chocolate mousse topped with chocolate preserve. As we licked the velvety mousse off our spoons, while carols softly wafted in the air, we rejoiced at the resurrection of Sakleys and promised ourselves many more visits to Music & Mountains- Hillside Café in the new year.
Cafe Culture Desserts Food Foor Review Gastronomy. Italian Food gourmet Happy New Year Music & Mountains Hillside Cafe Sakley's Wining & Dining