A tidy little gem, envisioned by the creative Anupamaa Dayal

December 11, 2017
I lie on the grass. It’s still moist from the dew wash. But the winter sun is slowly firming 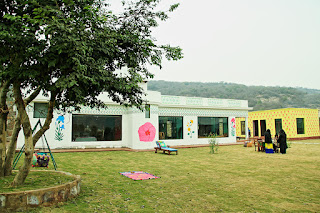 up the earth. Mahesh gets a plate of hot Gobi paranthas, fresh yoghurt and homemade pickle. Malhar's poring over something in the bushes. I get up to bring him to the table. He runs after an innocent pup and I run after him. What’s this feeling beneath my feet? It feels cold yet comforting. It’s called velvet in nature's parlance. And for once, I don’t grudge not slipping into my flipflops…

I spent the Sunday gone by chasing butterflies with my five-year-old at Anupamaa Mangar. 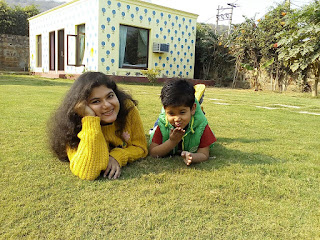 Little did I realise that life can suddenly become idyllic an hour away from Delhi. A quaint farm house designed by my good friend Anupamaa Dayal, who is toasted in the fashion industry for her penchant for colours and kitsch. After a long, long time I didn’t bother that my phone lay on the bed like a block of brick. I soaked in the sun without caring for my RayBan, ate without bothering about the weighing scale and let Malhar soil his clothes with gay abandon. The fun was that I got mine soiled too, while lazing and lolling on the soft moist grass.

Later, we drove down to the neighbouring sacred 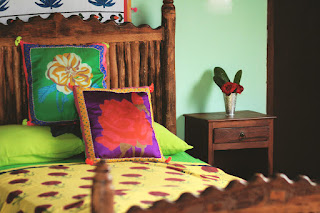 Mangar Bani and trode on the dirt tracks, surrounded by a lush cover of Dhau trees, only accosted by peacocks who fluttered around like partridges and pigeons and heard tales from our local driver about how the feathers of the national bird coat the tracks in April, the season for shedding. The sacred forest grove is protected by the local cult of ‘Gudariya Baba’, a local mystic who is believed to have vanished in a cave in Mangar Bani. We waited to witness Nilgais even as Malhar called to a squirrel just so 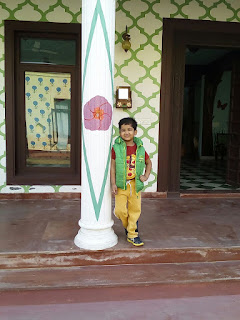 The creative instinct in Anupamaa has done quite a fascinating job here. While the structure is simple, the accoutrements are colourful and worth noting. Every inch of the place bears the Anupamaa Dayal mark and she wants to 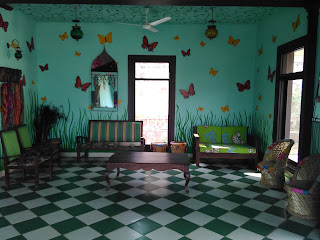 take the onlooker to a realm were reality blurs and wonderland ensues. Oversize blossoms have been painted on the façade, while jade green finds prominence inside. Modern Mughal graphics, images of Indian fairies mount the walls while colourful fabric installations have been used aplenty to decorate the rooms, all five of them. In the main living space, wall art gets a focus, with a stylised Mangar forest in the shape of the Dhau tree, winged apsaras and winged deer.

The five bedrooms are designed as per Anupamaa’s popular collections called Ishq-e-Dilli, Gulabi, Fight & Feast, Phoolbagaan and Manjula. A while back the designer had told me if not a designer, she would have been a naturalist. Anupamaa Mangar is an extension of that wish of hers to present to travellers a piece of rural India through her vision. 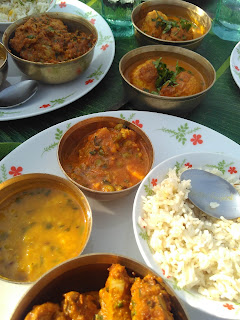 Mahesh, the amiable caretaker and cook, spoil us with a seven course Pahadi lunch. While the platter looks good enough to feed an army, we pig it all down after working up an appetite from the morning expeditions with the tot. Every morsel is divine and fresh, every preparation distinctly different from the other. “I have always been a passionate cook and teased for being a 'spice collector'. That is why the menus are based on creative Indian flavours and my own penchant for nutritious and conscious eating. The food is organic, with leafy greens and veggies picked from the nearby fields,” the designer said when I remarked about the delectable food we had there. The plan is to host high teas in an Indian style as well.

During sunset we climbed up the terrace to witness the 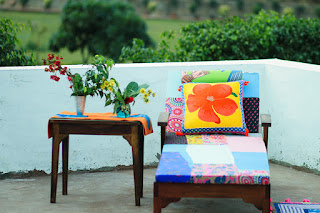 scraggy yet breath-taking Aravali foothills in the backdrop. The space is perfect for early morning yoga and meditation, and maybe some quiet afternoon reverie in the lap of nature. Those with adventure in their arteries can also walk around the village watching birds and studying the topography. It’s a quiet little village with simple people whose main stay is farming and diary.


While we nourished out frayed city nerves in this wholesome forest retreat, there is one thing that we kept reflecting on. How easy it is to let nature heal us. Only if we surrender to its power and positivity. As we hit the great Delhi crawl to start another busy week, all we could think of was how this little jewel rejuvenated us with its beauty and simplicity, making us yearn to go back again…