A Silver Jubilee of Success with The Alika Project

December 22, 2017
I meet him a week before the big celebration, at his workshop. The sun is playing truant on a foggy December afternoon…

Stepping into his room I find statues of Indonesian relics, rolls of heritage weaves, stacks of coffee table books and life-size images of yesteryear models scorching the runway in his creations dot the walls. But, my eyes immediately gravitate towards the huge pencil sketch of the couturier by artist Satish Gupta. “There’s two of them. The other one, an acrylic portrait, hangs in my living room,” JJ Valaya cuts into my reverie. “This is quite something JJ. I’ve actually grown up seeing you like this on TV, turban, sherwani et al,” I remark instantly. Guffawing, he says that he is considering wearing the headgear again, fills me on some memories from those days when he, along with his old friends Rohit Bal and Suneet Varma, were birthing a phenomenon called fashion in India and just like that the chill in air dissipates.

Poring over a few hundred images that would make it to the final unveiling of The Alika Project, he is like a possessive child guarding his precious belonging when I implore him for a sneak peek. But then, I can understand. A perfectionist like JJ would only want the world to see the best.

This Wednesday, as I walked into the gala, I gauged the extent to which he has put his heart and soul into the project. And also, why he was so guarded about it that afternoon…

The twentieth century French colourist, Henri Matisse had once said, “Creativity takes courage.” Even if not courageous, The Alika Project, stands out for the unconventional convergence of fashion, art and architecture, through the lens of the couture czar, who over the years has honed his eye to capture the breath-taking in an offbeat, dramatic and telling vein. In his 25 years in the Indian fashion and design industry, very rarely has JJ not pushed the envelope of his creative pursuits. But with this project, he has taken the experimenting a notch further by blending his own 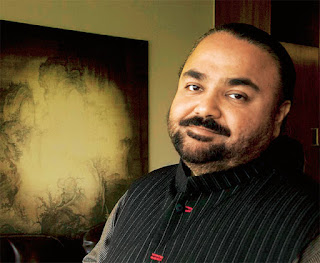 aesthetics with that of 24 fashion representatives of the country. The project has explored myriad ways of how they perceive his creation---the Alika jacket, a waist-length garment that has been a fixture in JJ’s repertoire ever since its birth in 2010. It takes brilliance and a wee bit of courage to think out of the box in this fickle world of fashion today.

The list of creative spirits chosen by JJ is interesting even more because it doesn’t feature the couturier’s old friends and peers. Names like Aneeth Arora (Pero), Aparna Chandra (Nicobar), Akanksha Arora (Amrapali), Gautam Sinha (Nappa Dori), Swati & Sunaina, Palak Shah (Ekaya), Dhruv Kapoor, Alpana & Neeraj, Gaurav Jai Gupta, Rina Singh, Ragini Ahuja, Payal Pratap Singh, Shivan & Narresh, Suket Dhir, Rimzim Dadu, Punit Jasuja, Pernia Qureshi and Sumant Jayakrishnan reveal how the veteran was stoked by the notion of working with minds distinctly different from his own. But, the final images testify that he enjoyed the process of unravelling how the two worlds converged to bring about an artistic explosion of sartorial brilliance. Be it how Dhruv Kapoor’s pale pink dress flirts with an emerald Alika, how stylist Gautam Kalra sexes up the traditional apparel with a monokini and fishnet stockings, how Aparna Chandra juxtaposes minimalism with opulence through a simple navi cotton sari, how wonderfully Aneeth Arora marries peasant chic and Indian workmanship and how a bespoke zari ganga jamuna Banarasi by Swati & Sunaina transports the iconic jacket into the hall of timeless elegance.

“Their work and ethos had an innate Indianness, which is a mainstay of our label. The choice was made focusing on that Indian element in their aesthetics. The Alika jacket is a bespoke manifestation of rich Indian craft and embroidery. The way it was styled by these creative spirits was fabulous. The project blends fashion, art and beautiful angular architecture of The Roseate, where the images were shot,” says JJ, taking us through the 25 photographs as well as the styled mannequins at the unveiling. Each of the installations as separated by a gossamer fabric lending a dreamy character to the set up. It’s like unravelling a prized secret one by one.

The Project, in collaboration with Swarovski (highlighting the designer’s association with the crystal brand for 15 years), brings the curtain down on the year-long celebrations as JJ clocks 25 years in the industry. The final ensemble, called The Black Bride, marries a Shifting Leaves (a design copyrighted by the House of Valaya inspired by the Chevron pattern) Alika with a gorgeous black anarkali embellished generously with Swarovski crystals. In his penchant to make the extraordinary the couturier has often converged an array of creative flights. Be it in the realm of fashion, design or homes, JJ has been lauded for his eye for opulence, heritage and utmost beauty. The Alika Project bears testimony to that yet again.

During his sojourns, JJ’s capturing the exquisite through a viewfinder has resulted in memorable vignettes in the shape of coffee table books such as Decoded Paradox and The Little Book of Memories: Istanbul. The titles are fantastic examples of his merging the realms of fashion, people and architecture to form a beauteous whole. “I wanted to do something with fashion and photography that was intimate, multi-dimensional and challenged stereotypes. Also, I wanted to see how these minds interpreted the Alika, a deconstructed form of the structured jacket. For the project, we created 25 reversible Alikas, one for each year. One side is embroidered and embellished with Swarovski and the other side is printed. This enables the seamless shift from a day to night look. Fashion needs to be versatile now,” he elaborates.

Apart from fashion designers, JJ picked six names who don’t necessarily design outfits. “I’ve always liked pushing boundaries, be it in fashion or design. They’ve interpreted the Alika diversely using their superior aesthetics and shown how one garment can be both traditional and edgy. For instance, scenographer Sumant Jayakrishnan, known for conjuring up magical spaces, says, “I know his knack for perfection and he knew that I had an extensive body of work in theatre that entailed costume design. The garment I designed to go with the Alika takes from the folk dancers of India who don the ghagra. The volume, the magic, the drama has been reflected in the structure.” In a similar way, Nappa Dori was chosen as Gautam Sinha, the owner, is a NIFT graduate. “Gautam’s leather accessories are elegant, classy and bear the mark of Indian workmanship,” justifies JJ talking about the image inspired by the pre-historic Indo Aryan warriors and flaunting the contrasting delicate and rugged side of the troopers.

When the couturier approached Peter D’ Ascoli, the textile designer was intrigued. To him the waist length Alika was a perfect blend of the traditional and modern. “I imagined it as an elegant, ornamental Mughal biker jacket and paired it with our Misha printed silk dress to fuse heritage with global aesthetics,” says D’ Ascoli who styled his wife and muse, the fashion designer Cecile for the shoot.

Every image has a story to tell. Stories that have made the journey of JJ Valaya memorable and special. “Next year we plan to take the Alika to global shores because it beautifully celebrates the happy confluence of the ethnic and the modern. It deserves to travel,” rounds off the beaming virtuoso.