With the Kings of Karauli

November 25, 2017
History has it that the rulers of Karauli, an erstwhile princely state of Rajasthan, kept tigers as pets. 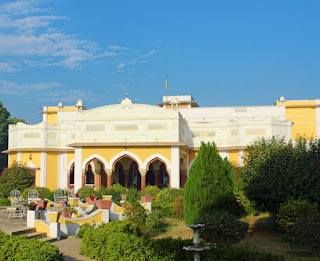 They bottle-fed tiger cubs just as we do to our baby pugs and Pomeranians. If you walk down its serpentine lanes, you’ll hear stories about the political intrigues at Timangarh Fort, if not praise of its rich architecture. Scores of pilgrims flock to the temples of Madan Mohanji and Kaila Devi nearby round the year. There are over 300 temples in this town, which form the focal point of two big religious fairs held here annually.

Raval, or the City Palace, is another treasure trove where the royal family lived before moving out to the lovely Bhanwar Vilas palace in 1938. The present king, Maharaja Krishna Chandra Pal, is the descendant of Raja Bijay Pal ji, the 88th descendant of Lord Krishna who originated from the Yaduvanshi kingdom of Mathura.
Now that is quite some lineage. As we ride the wave of festivities, my mind reminisces about the 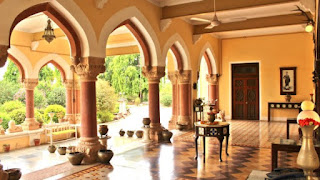 moments spent at Bhanwar Vilas, almost 8 years back, where Maharaj Krishna Chandra Pal wasn’t really the swashbuckling monarch but his warm hospitality made us feel like one. The palace is run as a quaint heritage hotel that is frequented mostly by expats who want to relish the princely treatment and the smattering of authentic Rajasthani dishes. Foodies ahoy!

The ancestors of the Karauli royal family celebrated Dussehra in a fancy way, where elephants were bedecked with finery when theyjharokha at Raval. He would take a salute, climb an elephant and release the Blue Jay bird, a symbol for the festivities to commence. Canons were fired for the parade to start. The kings and princes would be atop elephants and the chieftains followed on horses. While the parade moved all over town, the subjects danced on the streets and everyone enjoyed.” 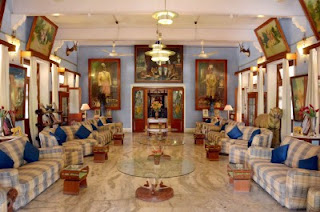 took their customary walk from Bhanwar Vilas to the City Palace. A festival that marks the victory of good over evil was all about pomp and grandeur in the bygone era. Rajputs worshipped their arms, their horses and religious fervour swept through the land for nine days preceding Dussehra. On the tenth day, as is the norm in a Kshatriya household, a big procession, replete with guards, forces and cavalry, readied to take a round of the entire city. “The king, replete with his royal costume and jewellery, came over to the

While such enormous celebrations are a thing of the past, we did witness the remnants up close. 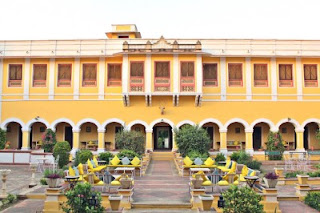 Bhanwar Vilas looked glorious all lit up. While every nook of the property was spanked up, the silver and brass were polished till they made the large Belgian glass mirrors redundant. It was such a unique experience seeing the royal women, Rani Rohini Kumari dress up for the Dussehra puja with her daughter, Rajkumari Katyaini Kumari and son, Rajkumar, Vivasvat Pal, in tow. Witnessing everything up close made the experience even more special.

As we heard the king narrate how his ancestors observed the festival, we gauged the splendour of the royal past of India. “My grandfather, Maharaja Ganesh Pal, who built the Bhanwar Vilas Palace, often spoke of the royal festivities that took place during Dussehra. We children, and mind you, the palace used to brim over with people those days, sat before him and listened in rapt attention,” he said.
During Dussehra and Diwali, dressing up in traditional Rajasthani costumes is a must in this royal poshaks and heirloom jewels during festivals. It is with these traditional poshaks that we wear lac bangles, a speciality of Karauli. If you walk around town, you will notice plenty of shops selling these bangles. The women here are gainfully employed as Karauli’s bangles are quite famous all over the country.” 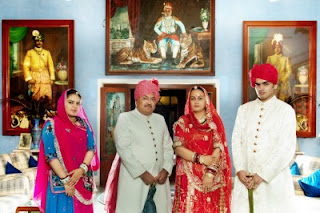 household. Says Maharani Rohini Kumari, “My grandmother-in-law, Maharani Jasraj Kumari, was very particular about customs and traditions. She ensured we got into our ethnic

Rajkumari Katyaini, who is married to Kanwar Shatrunjay Pratap Singh of Shahpura in Rajasthan, heads a small enterprise that employs local weavers and craftswomen. You can purchase these pretty wares at the curio shop in Bhanwar Vilas.
Rajkumar Vivasvat, also a painter, has graduated from the prestigious Mayo College, in Ajmer, and is restoring the dilapidated City Palace back to glory. The gargantuan structure, which was the living and administrative quarters of the royal jaali details make the structure a historical and architectural delight. “I am working closely with local painters and craftsmen to restore it. This place is a treasure trove. When I was in London, I was amazed to see a miniature Karauli painting exhibited at the Victoria and Albert Museum. This means that Karauli heritage deserves to be lauded globally.” Art restorer, Mrinalini Bangru, also visited the City Palace a few years back and has started work in restoring the magnificent edifice. 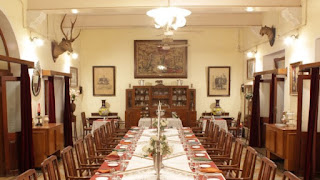 family before they shifted to Bhanwar Vilas, bears the remnants of its regal past. Miniature paintings, stone carvings, marble and

As we tucked into a multicourse lunch with the family we couldn’t help but wonder about the glorious past of colonial India. Even today, when the festive season beckons, the celebrations commence a month in advance. On all the nine days before Dussehra, the family ritualistically sits for puja and for Diwali, Goddess Laxmi is worshipped. Sweets are given out by the royal 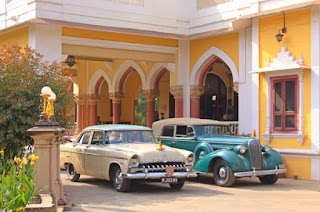 family to the local people, traditional multiple course meals are prepared and plenty of firecrackers are burst. Times might have changed but the brilliance of yesteryear celebrations continues. After all, this is royal India we are talking about.
Bhanwar Vilas Palace Boutique Hotel Getaway Holiday Hospitality Karauli Rajasthan Royal India Royal Retreat Tourism Travel