November 20, 2017
When I came to Delhi in 2008’s January, one of the first interactions I was assigned at India Today 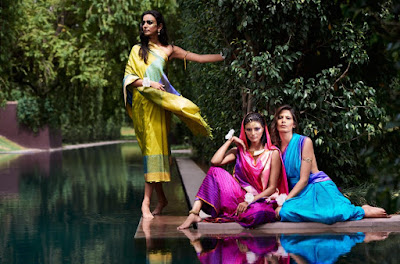 was with kota revivalist Vidhi Singhania. I loved wearing saris but my knowledge of it was restricted to what I imbibed from my ma, the elegant one in her Bengali tant. When this textile greenhorn walked into Vidhi’s lovely studio at Sunder Nagar market, an overwhelming feeling overcame the initial rush of awe.

But the textile designer instantly broke the ice with her warmth. Vidhi narrated how over the years she cajoled weavers in Rajasthan to give the kota fabric a new identity. Silk was included in the warp and weft to soften the stiffness of the kota, which was earlier known to be a simplistic Bagru printed sari. While her silk kotas were fluid beauties, her zari woven kotas were heirloom collectibles. We went on to do a lovely fashion together in Surajgarh Fort in Rajasthan where we bonded like how!
A few years later Vidhi extended her creativity to the banks of Banaras and since then every time I see her work I am gobsmacked. I have made a few Vidhi Singhania six yards my own and save them for the best events and special moments. A Vidhi Singhania will always be special to me.
The last time I met this fabulous textile designer, I good-humouredly questioned her reclusive stance because the recurring complaint among Delhi’s handloom fanatics about Vidhi is that she’s hardly seen at social dos. While one can witness her marvellous work at her artfully curated studio now in Greater Kailash, at posh textile exhibitions or on social media platforms, it takes a while to track her in person.
She can only let out a shy chuckle. Then when you witness the quantum of work that goes into those breath-taking saris, you realise what’s kept her away from the glare. Draped in a pristine handwoven organza, Singhania’s excitement is palpable as she gives us a peek into her new 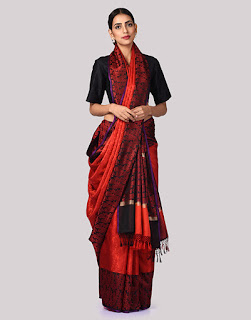 collection. A riot of colours in soft silks with zari motifs, each and every piece is a sight to behold. “No two saris are similar..,” Singhania says with a smile.

Lauded for reviving the Kota weaves of Rajasthan, the designer had stumbled upon the wondrous world of handwoven textiles while living in Kota. Since then, she has been working in tandem with weavers in Kota, Sultanpur (Uttar Pradesh), Mangrol (Gujarat) and Kaithun (Kota), apart from the ones in Varanasi.
The Kota sari has morphed from being a simplistic cotton six yard in bagru print. “The inclusion of silk yarns increases the fluidity so that they drape beautifully. If you are spending a substantial amount on a handwoven heritage, they should be light yet extravagant. That is refined glamour,” maintains Singhania, showing a gossamer orange zari tissue Kota with motifs taken from Gujarat’s gharchola weaves.
The designer opines that the sari should complement the personality of the wearer. “Luxury cannot be in-your-face,” she maintains, adding, “Our saris can be teamed with different blouses, jewellery, jackets and shirts for an edgy spin.” 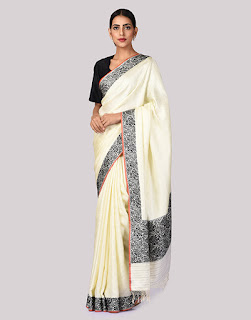 Singhania’s inspirations are Indian at heart but she has also toyed with new patterns. There are parrots, dumroos, chrysanthemums and various old motifs woven on the gethua fabric, using the minute kadhwa technique, but it is her offbeat designs that steal the show.
We notice a white, cyan and lemon yellow Banarasi inspired by the tartan checks. The Gajanan sari in purple has a zari border with four rows of elephants woven near the pallu. “These are limited edition pieces,” says Singhania, pointing to the Pushkar sari, with camel motifs, which reflects her fondness for the vibrant spirit of Rajasthan. The Ashwamedh sari has horses woven all over. The inky Checkmate sari, with figures of the horse and king in an oxblood hue, is quirky yet glamorous. “Our saris glide with you; don’t restrain you. After all, as Coco Chanel famously said, luxury must be comfortable in order to be luxury.”
For me, Vidhi’s saris are tangible luxury. But more than her breathtaking work, I respect the woman, who initiated me into the world of heritage weaves. What a journey it has been! Not only have I learned to love the craft and venerate the stupendous toil the weavers put into these exquisite saris but also the integrity with which Vidhi has been promoting these luxury weaves. My admiration for this beautiful human being makes me feel like I’m almost umbilically attached to her… 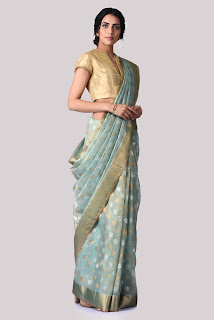