An alchemy of colours

November 20, 2017
I’m a 90s child. I grew up when television had the richest content and parents didn’t have to fret 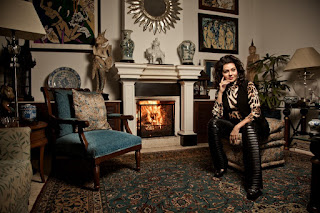 about child-locking channels. Yes, it was way simpler then. And prettier! I’m talking of times when artists like Anu Malhotra made television wholesome. We youngsters found a window to the hidden secrets of India through programmes like Namaste India. Bollywood figures like Gul Panag, Mini Mathur and Sanjay Suri were discovered by her.

A woman with many talents and a multi-disciplinary artist. I’ve been privy to an engrossing afternoon where Anu narrated stories from the years she was traveling all over the country crafting those fantastic travelogues for national television. Travel and expedition tales that took her to the innermost quarters of the country, be it the jungles or the mountains. She spent months with tribesfolk in Himalayan villages 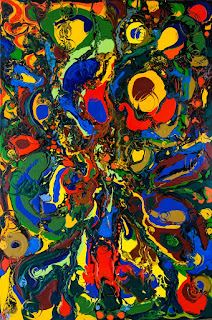 documenting their lives. The resultant was beautiful documentary series on the Apatanis of Arunachal Pradesh, Konyaks of Nagaland and Shamans of the Himalayas.

The creativity extends itself to photography (she is an exhibited photographer with her series, Soul Survivors being exhibited at the National Museum in Delhi) and writing as well. But while she was juggling all these facets, she nurtured a love for painting, debuting with an exhibition Hue Borne in 2014 followed by an international exhibition in Dubai under the Bruno Art Group. Her freewheeling, fluid style and use of myrias colours has garnered her acclaim in foreign shows like AAF Hongkong, KIAF Korea, Bazaar Art Jakarta and World Art Dubai.
A winner of 17 national and an international award for her 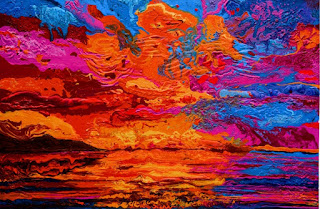 insightful documentaries, trend setting TV programming and revolutionary awareness campaigns, recently I watched her function in her painting studio. I stood mesmerised as she operated in a meditative trance. Her canvases, which she creates by pouring paint on them, are an explosion of hues, dreams and thoughts, mingling with each other without any bondage or structure. It only reflects the free state of her persona.

At her recent exhibition, Flow Dreams at The Lodhi, Anu has put up a smattering of mindblowing art that showcases her prowess in 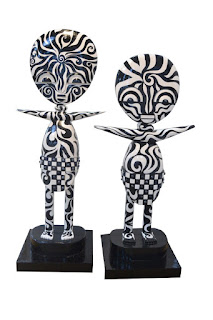 the field. The paintings reflect a stunning fluidity, where she has created abstract patterns without the brush. But despite lacking form or shape, these pictures tell intimate tales. The tribal dolls, totems, masks and sculptures, if not for anything, are perfect renditions of shape and hues that could beautify any space they occupy. They also reflect her penchant for tribal art that she has honed her senses in during all her travel years. They have a rustic charm in them that is unparalleled. Just like the incredible energy of their creator.
Anu Malhotra Art Artist Colours Culture Exhibition Flow Dreams Painter Visual Artist