Incredible India, served fresh at Fire, The Park this season...

While we almost wilted in the gruelling June heat of Calcutta this time, one morning our house-help of 20 years, shoved a mug of liquid in my hands with a stern, “Drink up. This will cool you down.” The translucent brown liquid had things floating in it. While I apprehensively took a gulp, she affectionately added, “This is kothela.”
Surprisingly, the Jigarthanda served at The Park’s Fire yesterday, had kothela too. Almond gum for the uninitiated. And, gond in local parlance. The milky sherbet that was topped with a dollop of caramel ice cream is a popular Madurai drink concocted with almond gum, nannari syrup and milk. On tasting it, I couldn’t help but exclaim, “This is kothela, right! The coolant!” The appreciative nods at the table meant I had been able to connect the dots. How amazing is regional food! Eaten in different kinds of preparations in different states but for similar effects. This is how cultural differences are bridged, I believe. Over unique food that take different avatars in different kitchens. By the way, almond gum flakes pops when fried. Gond laddus are made with them. Sounds familiar, right?

Considering that the range of regional dishes in India is vast, to carefully curate and put some of the choicest ones on the menu could be a tad tricky. Because, in some way, the dishes should be complementing each other. Like, I doubt whether Nagaland’s Pork with Bamboo shoot would go well with a Parsi Mutton Salli Boti... You get my point, right? Hence, it indeed is a delight to see the new menu platter laid out before us at Fire every time. While the restaurant’s farm-to-table operandi ensures you only eat seasonal produce that is freshly procured in the morning, there is also that element of surprise when you see something written on the tasting menu, but the amiable chef walks in with a few more extras. “This came in fresh today morning,” he said this time, pointing at the Beans Fogath, a Goan green and the Kathal beej (seeds of raw jackfruit tossed in baby onions and spices).
But that’s not all. While you get familiarised with the dishes and their origin, you also hear stories associated with them. That rustle up nostalgia. I think for me, that is the biggest pull. Like, the tiny shop that popularised Jain Shikanji in Modinagar, has become so famous now as a brand that they sell their own Shikanji spice. And yes, people still flock to that shop to drink up tall glasses of the drink on a hot, humid day.

The Kulhe ki chaat, synonymous with the bustling lanes of old Dilli, has been replicated as a starter here. The twist though, is added by carving a watermelon block to resemble a kulhar, in which the original chaatwalas serve their ware. Once you pop that juicy watermelon into your mouth, be prepared to enjoy the riot of flavours and textures erupting in your mouth.

Fire has been a proponent of organic food for a while. Microgreens grown at the hotel’s premises, organic cereals and ingredients actually lift up the taste and freshness of the dishes. In case you opt to have the puffed red rice and yellow lentil salad with khamang kakdi (a Maharashtrian cucumber), summer leaves (amaranth, rocket and three varieties of spinach), chickpea lentil, bell peppers, mint vinaigrette, goat cheese and onions, try to recollect where you have tasted something close to this. The chana dal chaat served on a moving bus or train… rings a bell?

Frankly, I’ve always shied away from Bombil. Or Bombay duck. The Mumbaikars would know what I am talking about. Married to an east Bengali, the fish, that we call ‘Loitha’ at home, has been a regular entity. Either cooked as a dry fried dish with onions, garlic and spices, or dried to make Shutki Maach later. It’s the stench that divided us. But, the Konkani rava fry is different. The fresh fish is marinated and coated with a sooji batter and deep fried. The bones are fibrous so don’t get intimidated. Eat up with the jalapeno thecha, a tangy spicy chutney. I also tried the homemade raw mango chutney. Yum.
But, if you are wary of bones, opt for the Duck Seekh kebab, a neatly done dish that is served with fresh roselle chutney. My favourite, however, was the Farali pattice, topped with chickpea curry. Originally from Gujarat and eaten during fasting (cereals are not added in the cakes), the pattice here is tweaked with the inclusion of chickpeas. A delectable vegetarian snack.
I’ll quickly enumerate what I loved from the mains. While every dish packed a punch, these are what you must not leave Fire without eating. The Jardaloo salli boti. The mutton coated with apricot mush, potato slaw and ground spices, effortlessly comes off the bone. Also, it is served as it should be. As a dry sticky dish. Not like the one they serve at Soda Bottle Openerwala. Overrun by gravy. Yes, I’m saying the one at Fire is better. Any day.
The rice and assorted breads will be accompanied by a Karonde and Hari Mirch Tappore. It’s delightful. The sour of the karonda is countered by the spice of the chillies. I’m told it’s a regular with locals in UP. Especially during summer when the tongue craves for something sour. While Saavan is here already, I believe it could still up a platter because of its fresh flavour. 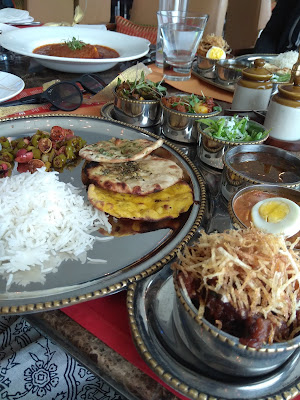 Pescatarians must try the Andhra Fish curry. Trust me, if I wasn’t stuffed to the gills, I would have had another portion of this fresh pomfret cooked with tamarind and homemade curry paste. Oh yes, a special mention for the Bhatt ki dal. Black soyabeans dal topped with molten desi ghee. Wholesome and aromatic. Just like how good food should be.
While this is the summer menu, the good part is that the restaurant keeps rotating the dishes every season according to the produce they get from the farmers. So, be assured that you will be served only the best. In quality and taste. Like we got in the form of the summer berry kulfi with kesari falooda. Cherries, red currants, blackberries and blueberries form the crux of this dish. I am not a kulfi person. Simply because, the saccharine and pungent pistachio cream leaves my tastebuds and nostrils a tad cloyed. But this one was light, fresh and delicately sweet.

Chef Ajay Jain, the man behind all this glorious food, informs me as we end our meal with the jamun and kala khatta sorbet that dark purple fruit is called Java plum in English. Now that I was not aware of. My father-in-law says they are black berries. At least now, I can correct him with conviction. If he argues, I’ll emphatically say, “I’ve eaten a mean dessert made of them. I know!”