Showing posts from September, 2018
Show All

One of the displays at the Nitin Kohli Home studio. Pic by Atul Pratap Chauhan If you have seen Sofia Coppola’s 2006 historical drama Marie Antoinette , then you might remember the scene where the 14-year-old Marie Antonia enters her chambers in the Palace of Versailles for the first time. The young Austrian princess who has been sent to marry the dauphin of France as a sign of political alliance is starry-eyed seeing the architecture and interiors of her now home. Her exquisite and opulent royal home. Despite being born and brought up in a palace herself. The fair lady almost gawks at the large halls decorated with European art-deco furniture finished with rich silk and chinoiserie upholstery, the flowing velvet curtains and the ornate gilded carvings on the ceiling. The shimmering glass chandeliers, the invaluable table accessories, the luxurious stain sheets and bedspreads. After exploring one room, she peeks into the other to find golden chairs upholstered with duck egg
1 comment
Read more

Purvaiya--- the aromatic breeze from Bihar 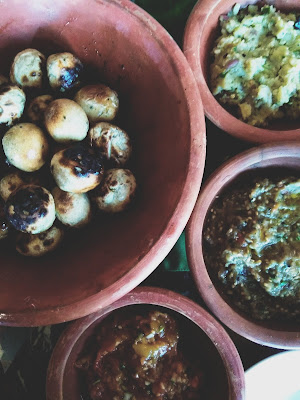 Litti Chokha A long, long time ago, there were jute mills in West Bengal. And, in those mills, the labourers were the migrated communities from Bihar, the neighbouring state. They brought a bit of their culture and a lot of their food in their own ‘promised land’. As they worked and lived in Bengal, they adopted the food habits of their new settlement and adapted to its living as well. But they did not forget the food of their motherland. They ate the simple meals at home and spread the flavours around. The merge and the mix were somewhat inevitable. With the man of the moment, Maneesh Srivastava, and other pretty ladies at the festival This simplistic deconstruction doesn’t really shed light on the plight of the jute mills workers when gradually the mills shut down one by one but it does one thing… point out how, with time, the food of the two cultures grew close. Yes, the foods of Bihar and Bengal have much more similarities than one might be aware of, but as I tucked
3 comments
Read more
More posts