Asian plunge at The Fatty Bao, Kolkata on a rain-drenched afternoon


We caught the first day first show of Incredibles 2. Bono and his mamma were simply enthralled by the action-packed narrative interspersed by the comic high points. Yes, it was a good two hours spent. But, before the film started Bao, a computer-animated short film by Domee Shi, warmed the cockles of my heart. Depicting in brief the emotional state of a Chinese mother going through empty nest syndrome, it was a perfect way to whet my appetite for what followed. Also, now I think it was prophetic. 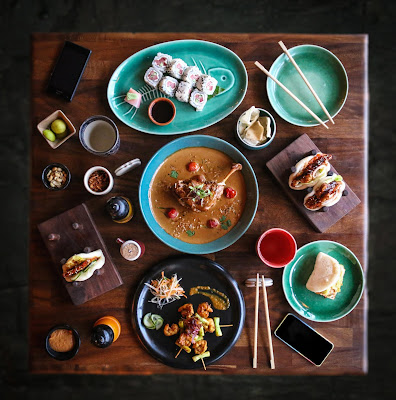 The next afternoon I found myself at The Fatty Bao for an Asian meal, comprising dimsums, sushis, baos and ramens. I’ve been hearing about the many new eateries sprouting in Kolkata and this place has been making some noise ever since it opened in December. Any venture by the Olive group promises quality food amidst a classy ambience considering the name behind them is AD Singh. After conquering foodie hearts in Delhi and Mumbai, The Fatty Bao needed an outlet in City of joy to appease its discerning food palate. 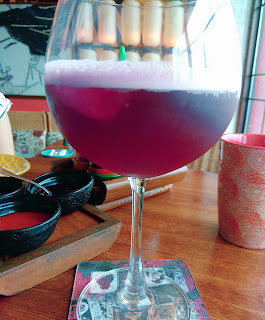 The restaurant, sitting on the 8th floor of the Fort Knox building, gets an aerial view of a large part of the city. Trying grabbing a table near the window screen because the expanse of the sky meeting your eye as you sip on your Sakura Sakura feels good. I was lucky that the sun was playing truant that day. The overcast sky was even more comforting as I tried the green apple based drink, one of its signatures. The restaurant has just launched its Monsoon menu, a veritable selection of Ramen bowls, and the décor flaunted the theme perfectly. Apart from the Oriental lanterns and the spurts of graphitti and colour on the walls, white mini umbrellas suspended from the ceiling were symptomatic of the season of shower. 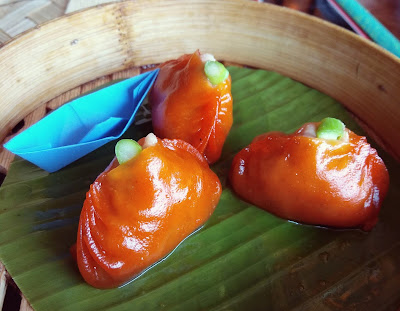 We started off with a chicken and asparagus dimsum that were an interesting orange colour and tasted just as any good dimsum should. Moist, aromatic and appetizing. The restaurant follows the regular Fatty Bao format of flavours that is prevalent in all its branches but the chef is willing to customize the spice level for you. We tried the cream cheese, asparagus and roasted sesame sushi after that. I’m not a sushi fan but I love asparagus. Piqued by how cream cheese would come together with the Asian elements, I found the Asparagus tempura the overriding element in the sushi, which I did not mind. The cream cheese is best kept for European delicacies I guess. 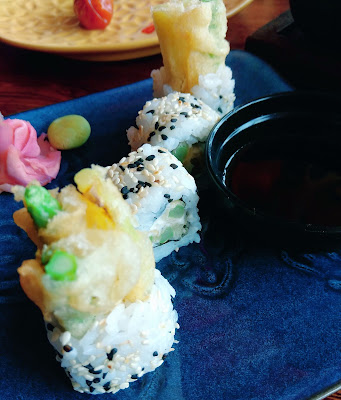 Chef Sumit Chaudhury recommended I try their best selling Char Su Bao and I must say it deserves the acclaim. My pork bao was accompanied by wet tissues, a gesture that took me a while to wrap my head around. But the moment I dug my teeth into that juicy bun, I realized that the wet tissue is the perfect face-saver of an adult gastronome. The pork was laced with a sweet and salty sauce that had permeated into the roasted meat. It was luscious yet crispy and the bao was light and fluffy. I could have this as a snack quite often, I decided.
Being a noodle fan can be a bummer when there are host of other exotic dishes beckoning. But I’ve realized in all these years that one must do what makes one happy. So, overriding all the other authentic and fancy items on the Asian menu, I opted for a Chinese Chicken Mixian Ramen bowl as my main course. It also is one of the eatery’s hot sellers and apparently this particular Ramen dish is moving fast in the other metros, too. 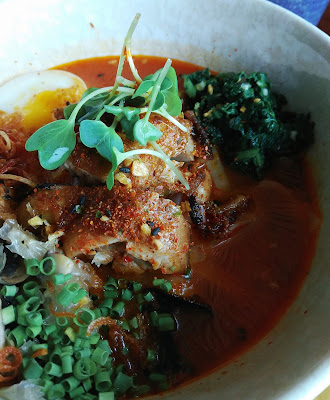 When it landed in front of me, I could sense why. The soft soupy Yunnan-inspired rice noodles was topped with cut pieces of confit chicken, fried garlic, marinated wild mushrooms and spinach. The chicken broth was bound together with a homemade chilli paste and a chilli bean sauce while it also had the perfect umami aroma. The interplay of textures---the succulent chicken, the soft noodles, the crunchy garlic, the squishy spinach and mushrooms---made it the perfect bowl to dip into on a rain-drenched afternoon. A winning choice, I must say. 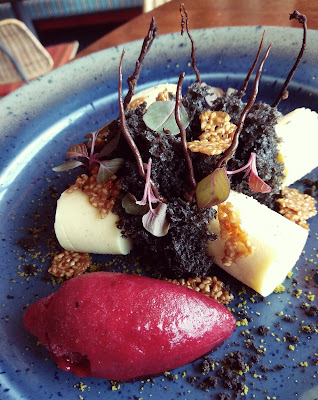 I got luckier after that. The amiable chef sent out two desserts. I must confess that my heart beats really fast at the sound of sweet. And, at the sight of the Cocoa Caramel and Zen Forest, it did skip a beat. Zen Forest was a beautifully plated dish of black sesame sponge cake, yuzu parfait, sesame nougatine, beetroot and black pepper sorbet, valrhona chocolate twigs and microgreens. It tasted delicate and fresh too. But I was sold on the other dessert. Cocoa Caramel was all about milk chocolate cream, hazelnut praline crisp, flourless chocolate cake (that reminded me of my mother’s chocolate pudding), toasted meringue, salted caramel gel and salted caramel ice cream. Orgasmic, for the want of a better word! 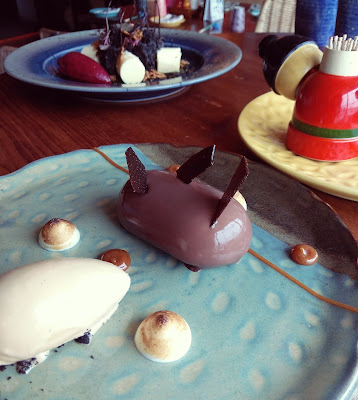