Exploring the many forms of Ikat

December 03, 2017
Textiles are rich in history; with each weave and motif chronicling the stories of its place of origin. 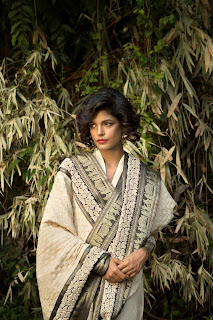 This belief is ingrained in the mind and works of crafts revivalist and textile conservationist Madhu Jain, who courtesy her grandfather, who was a freedom fighter, was always proud of India’s indigenous handloom legacy, particularly Khadi. Before she knew it, she was travelling into India’s interiors to discover the artistry and brilliance of weaver communities, all of whom had honed their craft generationally. Jain is known for incorporating the present into the past by weaving together historical patterns through the textiles that she develops.

Working mainly with ikat, Jain says, “As an artist I like to have visceral connection with my work. That has happened with ikat, as I’m fascinated by the geometry inherent in this extremely complicated ancient weave, and am chuffed by the fact that several countries across Southeast and Central Asia, Central and South America, and Africa are home to this ancient weaving technique, each with its distinctive motifs and patterns.” Though, double Ikat is found only in four countries—India, Japan, Indonesia, and Guatemala—as it requires a rare expertise and dexterity in weaving the motif in both the warp and weft. Interestingly, what is common across all regions is that Ikat has traditionally enjoyed the patronage of
the wealthy and those in power. In Uzbekistan, for instance, Ikat was worn only by nobility and the rich for ceremonial occasions, which meant that the choice of cloth was silk and the jewel-tones and bold motifs honoured their status. In Thailand too, Ikat was the preferred choice of aristocrats, but for daily use. In Indonesia, Ikat garments were viewed to be sacred and were imbued with sacred motifs. This heightened the luxury element of the textile.

Jain’s passion for the weave has led her to blend a variety of traditional Ikat motifs from different countries—but woven in India—attaining a cultural confluence that has served to advance this weave. “I have worked with the Adras and Atlas forms of Uzbeki Ikat and made it my own by 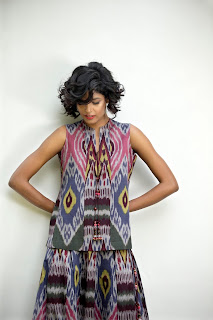 weaving it in Indian colours. I have used the Thai Mandala design in my weaves, interlacing it with an Indian sensibility. From Indonesia, I have borrowed traditional motifs and incorporated those into my latest creation: the Bamboo-Silk Ikat textile, a first of its kind of textile in the world.” The works get a modern twist by assimilating different motifs, colours, and textiles from different regions into the ikat weaves. Jain has been contemporising Ikat with innovation at both the design intervention and production ends, consciously ensuring a unique character.

For Jain textile is the king and does all the talking. In today’s context of global warming, her Bamboo-Silk Ikat textile is aspirational for those who care about the environment. This unique textile ticks all the right boxes that luxury brands should be seeking to emulate, says Jain, adding, it does not deplete the earth’s resources, is biodegradable, UV-protective, and anti-bacterial. It is also a soft and incandescent fabric that is suited for both the punishing summers as well as winters. 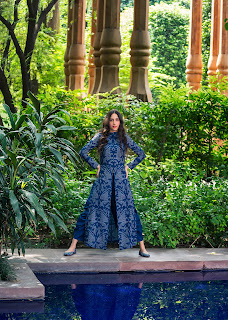 If you look into Jain’s current works showcased at the just concluded Amazon India Fashion Week 2017, you will see a royal Venkatagiri collection from Andhra Pradesh, woven in the Jamdani tradition, where the weave is reversible. She has used tribal motifs that exemplify being one with nature. Another textile incorporates paintings from the Puranic frescoes of Kerala’s Guruvayur temple complex. The aura is classic and vintage using natural dyes and pigments.