The Enchanting Art of our Tribes

November 29, 2017
In a small house on the outskirts of Bhopal, two city dwellers engaged in a conversation with a Bhil artist. For the uninitiated, Bhils are an indigenous tribal community found in the western Deccan regions and central India among other smaller clusters in the subcontinent. While the simple old woman narrated the wonders she witnessed during her last visit to San Jose, her audience couldn’t help but ask her, “What did you eat during all those days?” A couple of bananas in the morning would prepare the old lady for the day of presenting her artworks before the art crème of the city, interacting with the audience and being celebrated for her exemplary creative eye.
But Bhuri Bai, one of India’s first contemporary Bhil artists, was unfazed by the international hullabaloo. She continues to be the simple charmer creating those intricate artworks that are stark in form and colours, yet successfully conveys the vibrancy of life forms. At least that’s what Rasika Kajaria and Mandira Lamba discovered when they met the acclaimed old artist in her home a few months back while scouring the country to dig out names of tribal master artists whose works would be worth unravelling. “You wouldn’t even reckon her as this phenomenal artist when you chat with her. But when she starts painting you see her metamorphosing into this gigantic creative powerhouse. These people continue to live their lives away from the glare, sometimes even their ingenuity going unapprised. Tribal Art Forms is an initiative to bring these 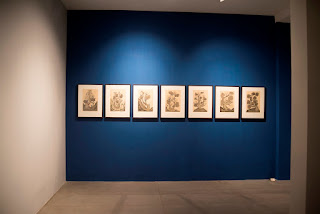 iconic talents into the spotlight,” says Rasika, at Exhibit 320, where every art connoisseur must go and witness the beauties created by master folk artists and their immediate apprentices. Interestingly, ‘Given Power’, that was inaugurated by Amitabh Kant, CEO of Niti Ayog, is a showcase helmed by contemporary galleries Exhibit 320 and Mandira’s Blueprint12 (that she owns with her sister-in-law Ridhi Bhalla).

Bhuri Bai is just one of the artists whose brilliant works have been put up. The two art connoisseurs have given a platform to iconic works by the legendary tribal artists from Madhya Pradesh, Bihar, Maharastra and Bengal. You will find works by Sita Devi, Jangar Singh Shyam, Ladoo Bai, Soni Jogi, Japani Shyam, Nankusia Shyam, Narmada Prasad Tekam, Ram Singh Urveti, Sadashiv Soma Mashe and Kalam Patua gracing
the walls of the gallery. It is commendable that the artists and artworks chosen create a story that takes the viewer on a very personal journey of exploration of the creative thread that runs in the artist and his family. For instance, once you have delved into the spectacular instincts of Jangar Singh Shyam, who belonged to the Gond community of the Mandla district of Madhya Pradesh and who was discovered by artist J Swaminathan and brought at Bharat Bhavan in Bhopal when he was just 16, you move on to explore how his son, Mayank Singh Shyam, his daughter Japani Shyam and even wife, Nankusia Shyam, was influenced by his style, even as they evolved on their own. It’s a fascinating story as Jangarh, who earlier just painted with natural dyes, first discovered colour…

While the show is an effort to invite the reader to discover other regions, styles and artists that epitomises the incomparable diversity of the contemporary tribal and popular Indian art, I thought, while being blown over by every frame that I witnessed, that these are artists about whom we need to know more about. Because so far, despite the acclaims and the awards, they have been absent from the regular art aficionado’s consciousness. These are artists who have created these spectacular artworks, while living out the daily drudgeries of life. They have lived with art, which is a natural instinct for them. In many of the works, they have depicted their lives, their works, environments and their feelings. Like in Balu Jivya Mashe’s Warli
painting, leave aside the absolute intricacy of the brushstrokes on dung paper, what is attractive is how he enlivens the fisherman’s job on the canvas. In the work by Soni Jogi, a veritable riot of colours depict a woman’s role in a village on canvas, whereas an ink on paper, explores her thoughts about her liberation through parachutes.

While earlier these artists painted on walls of their homes and used natural dyes, already the medium is changing. “The use of paints and canvases mark a change in medium. It is only imperative that gradually these artworks get merged into the mainstream. Like, these wooden sculptures can double up as benches in anyones’s garden or lawns. The art by Kalam Patua, with its highlights on how Bengal babus were influenced by the British rule, will make for a quirky wall decor,” says Rasika.
What is heartening is that Rasika and Mandira are not doing this as a one-off show to grab the connoisseur’s attention. They realise that a consolidated effort is required to bolster the situation of these artists. Hence, an online forum called Tribal Art Forms, has been launched to showcase and deal in tribal art by these master artists and more. Tribal Art Forms will be debuting at the upcoming India Art Fair, 2018 and in March the enterprising women are taking the platform to Hongkong Art Centre.
“While we understand that these artists and their works need to go global, given that they live in closed communities, have simplistic backgrounds and no reach, they are losing out. This show is the beginning of our continuous work with them to give them their due and to explain to the powers-that-be that they deserve an equal opportunity, if not more, to be celebrated in art circles of the country and the world,” say the duo who have been supporting emerging talents with their unrelenting support and motivation.
Exhibit 320 and Blueprint12 have created a niche in singling out names from India and Asia who are different, unique and immensely promising.

While I can go on and on about ‘Given Power’ that struck me with its beauty and brilliance (I spent more than an hour just staring at the magnificent works), I suggest you go see the show (on till Dec 24th at Exhibit 320) for yourself. It is bound to leave an indelible impression on your mind…