November 26, 2017
In a presentation by Padmashri Geeta Chandran’s dance company, Natya Vriksha called Anekanta last November, Sharanya Chandran relates how the Bharatanatyam renditions were inspired by roots of Jaina philosophy. The audience in Delhi were stoked by how the traditional dance form was exploring the existence of multiple truths of life. Opposites could co-exist. While the grammar of the dance form was intact, the dancers experimented with stage design, stagecraft, music, movements and choreography. Says Sharanya, “To translate the very abstract theme of Anekanta into an aesthetic visual experience, we tried multiple choreographic devices. For instance, there was a segment on how the alarippu (the first pure item taught to any student of Bharatanatyam) could be performed differently using various rhythmic interplays but they all converge in the sama (last beat).” The ancient dance form communicated this universal philosophy innovatively. Anekanta will be staged tomorrow at India Habitat Centre. You mustn't be missing it.
A mix of rhythm and improvisation speckles Sharanya Chandran’s body of work. A few years back when she was sharing the stage with her mother and revered guru, at Sankat Mochan Festival in Varanasi, every watcher noted how unfazed she was by her mother’s manodharma (improvisations).  Sharanya seamlessly matched up. Says Dr Geeta Chandran, “Sharanya had imbibed the art of manodharma, of creating at the spur of the moment. That tells me that she is on course. And she always puts in her best.”

That is what Sharanya loves doing the most---improvising while on stage. “Because I have a formal training in nattuvangam I instantly respond to the musical surprises through mudras and abhinaya. One is able to fly while still holding on to Bharatanatyam’s core vocabulary,” says Sharanya, who has received heavy accolades for hertalent and work over the years. Says Dr Nita Vidyarthi, dance critic, about Sharanya, “Her urge to co-ordinate movements of the body in response to the beats of the nattuvangam and mridangam seems inborn.”

Adapting to new ideas and innovation is the call of the hour, she feels. “We constantly respond to the revolutions in space design, music and time but there has to be a deft balance to retain the core grammar and aesthetic of the style.” Earlier traditional Bharatanatyam was a solo art form. With larger spaces available, duets and group recitals have become common, providing the opportunity for innovative choreographies. However, there are challenges too. With reduced demand and budgets for having live music for dance, often one has to perform to recorded music, which minimizes scope for improvisation on the spur of the moment, the dancer laments.
Then there is also the growing challenge of reaching out to diverse audiences, “For instance, we have taken the iconography of Shiva and performed it to an English script to try and bridge the language gap for certain audiences. Once there is a core understanding and connection with this imagery, shiva stutis or similar compositions in Tamil, Telegu or Sanskrit become a lot easier for audiences to relate to,” says Sharanya, who holds a Masters degree from the London School of Economics in Development Studies. On any given day, this dancer can be seen multi-tasking. She does her solo rehearsals in the mornings and group practise in the evenings. During the day, she works at the intersection of rigorous research and policy for solving key development challenges in South Asia as she is a developmental professional in the policy space. 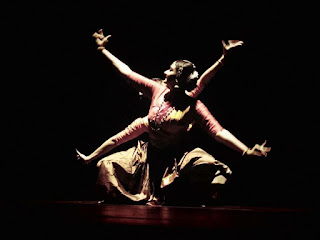 Sharanya was one of the focal dancers of Sankriti, a group showcase conceptualised by Odissi danseuse, Madhavi Mudgal. “The showcase, an amalgamation of five classical dance forms, travelled to US, Thailand and several parts of India,” she says.

The youth ambassador to multiple youth and art communities, Sharanya is also the vice president of Natya Vriksha. These youth forums, she feels, are one of the best means of generating awareness on classical dance. “Through the global shapers community, the youth initiative of the World Economic Forum, I am spreading the message of classical dance. This being the year of India and Japan friendly ties, I am part of the youth delegation to Japan this May for an exchange programme where my key goal would be to spread awareness about the beauty and potential
offered by Indian classical dance. Also, like every year during World Dance Day, at Natya Vriksha, we organize a festival in collaboration with the India International Centre (New Delhi), through which we provide a platform to young and emerging dancers from different parts of the country,” informs Sharanya.

Sharanya feels the dance scene has changed quite a bit over the past decade or so. For one, there seem to be more dancers taking up dance full-time. There is more demand for group work, and multi-style collaborations for big events and spaces by sponsors and event organizers. Also, budgets for classical dance are shrinking, be this from the government or then corporate sponsorship. Despite the new CSR ruling, preference of domestic donors still seems to be in funding more visible assets and development programmes (e.g. construction of a skills or education centre, etc.) than the more intangible interventions such as preservation of Indian culture and heritage. There are a lot of compromises dancers need to make today for securing performance opportunities, especially with the meagre or non-existent payments for concerts. I have made a conscious choice to cross subsidize through my other (better paying) passions, so as to taking up performances on my terms and conditions and not those solely set by the organizers.

But perhaps, there is a bigger way through which Sharanya is advocating change. “I singularly avoid those pieces that propagate caste hierarchy and project women in an inferior/ unequal light. Change is what you do on stage, and also the things that you choose to not do. Through this choice I shall communicate the change,” she rounds off.
Art Bharatanatyam Culture Dance Indian Classical Dance Performance Personalities Sharanya Chandran