November 24, 2017
Bawali, a nondescript little dot on the map of Kolkata, hides little tales in its serpentine folds. That it 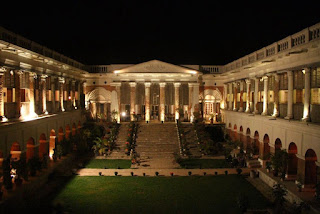 was inhabited by the Bauli tribesmen 500 years back, that it encouraged prolific trade and commerce under the zamindars and that the Mughals patronised the townsfolk. You won’t hear these stories anymore.

Not unless you walk into The Rajbari Bawali, a 350-year-old heritage mansion that has been restored back to glory from the brink of destruction. I give it to Ajay Rawla’s vision and unrelenting toil as well as the indescribable efforts of his team, for giving this gem a new lease of life.
Last summer, while vacationing in my homeland, 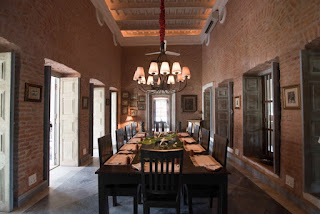 I broached the idea of a weekend in the rajbari before ma. She’s kind of a homebird. But the heat and humidity had sapped all of us, including my hyperactive tot. We needed the change.

Rajbari Bawali appears out of nowhere after a 2-hour drive from the city. Standing grand in white with naked brick walls, it’s smelt like a fragile page from an old hard bound. All I remember was while Bono pounced on the antique four-poster in our room before chasing the unsuspecting ducks in the backyard with his Didai in tow, I took my own sweet time 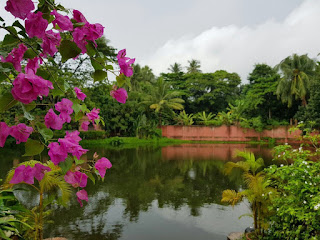 absorbing the beauty around. The staircases, the corridors, the rooms, the interiors, the windows… everything paid an ode to the redolent life of the Bangali bhodrolok. The rich zamindar who had a yen for luxury and promoted the languid leisures of life…

Every stone takes you back to the days of yore…when long sunny corridors rung with familiar laughter and chatter, when gardens invited with its lushness and fresh blooms filled the air with sweet aroma. When young boys splashed around in ponds after filling themselves with ripe guavas hanging from the trees in the garden and women completed their ablutions early so that they could cook a multi-course meal for the whole family. When days passed in a lazy slumber and evenings was about hearty banter. Innocence and simplicity 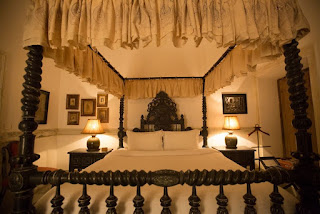 infused happiness into souls. The Rajbari Bawali, a heritage and romantic retreat in the buzzing town of Budge Budge, is an ode to that decadent era.

In the 17th century, Basudeb Ray, a prominent official of the Mughal court of Emperor Akbar, was bestowed the Zamindari of the area of Bawali. His descendant Harananda Mondal was one of the earliest to found the Zamindari at Bawali. Good times rolled with effective land reforms and trade partnerships with the British. The Mondals of Bawali soon became a name to be reckoned with. The property is a standing proof that the Mondals were prosperous and loved living well. Since the old architecture has been restored, one can see that the mansion was made in great taste. Tall and sturdy pillars, broad verandahs and corridors take you to the beautifully done up rooms, each complete with four-poster beds and antique furniture, all from the personal collection of its current owner, Ajay Rawla. There 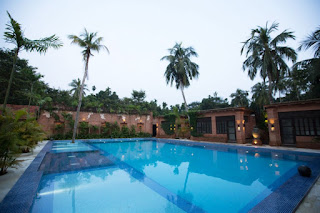 are the normal rooms with its quaint yet stylish décor, the suites have a sitting room attached, which are again finished up with exquisite old Bengali furniture and antique carpets. High ceilings, wooden windows and blinds retain the old-world charm of the place. It’s like you are living almost 250 years behind time. Every wall in the room is dotted with photoframes of the ruins of the Rajbari (when it was discovered and bought by Ajay). But even in these frozen shots will you find the innate beauty of the building. New rooms have been added to the property near the banquets and the swimming pool but the style has been retained to match the original. A spa makes the property complete. Ducks, squirrels abound the shrubbery around and the unruly foliage around is a happy nest of myriad butterflies and birds. A kind of carefree abandon is maintained in the place. No manicures, no control… 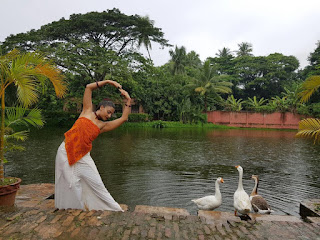 On arrival guests are greeted with the sonorous call of the conchshell and fresh green coconut water. The thakurdalan has been converted into the dining hall decked up with antique gramophones, large pictures of Satyajit Ray and Hindu deities. In the evening, respect is paid to these deities, as is the custom of every Bengali household.
Lunch is an elaborate affair, reminiscent of the glorious food culture of Bengal and is handled ably by The East India Tea and Spice Co. Choose from 50 recipes of authentic Bengali food. Lovebirds can dine by the pond under the stars.
The Rajbari experience is crafted to appeal to the connoisseur, the adventurous and those in search of an special experience. We partook of a regaling music session by two Baul singers are they left us enthralled. There are also traditional dance recitals and musical soirees arranged on demand for guests.
Bono forgot one of his favourite story books there. But, that’s hardly a reason for revisiting. I am 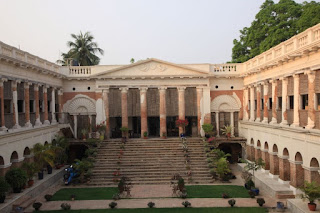 going back for reliving that splendorous time, for breathing in the intoxicatingly fresh air, for listening to the mellifluous Bauls and for the smorgasbord of delicacies… For living the charmed life… even if for two days!
Ajay Rawla Conservation Getaway Heritage Hospitality Luxury Opulence Rajbari Bawali Restored Retreat Tourism Travel West Bengal